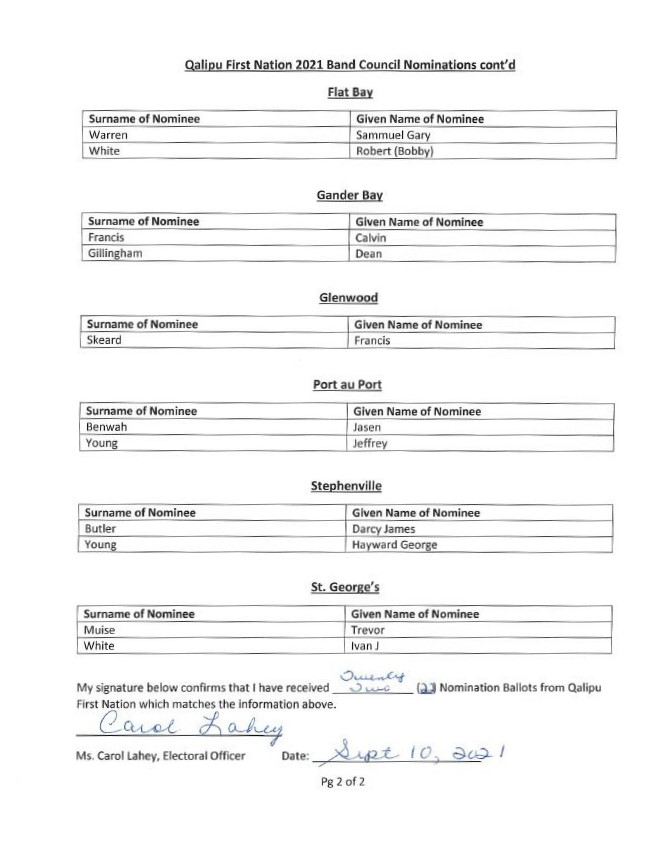 Qalipu Mi’kmaq First Nation Band will hold its Annual General Assembly (AGA) to discuss the activities of the Band for the fiscal year of 2020-2021. The AGA will be held on September 26, 2021, at 1:00pm in Corner Brook, NL at the Greenwood Inn and Suites. The Central Region AGA being hosted in Grand Falls-Windsor will have its event space, date and time announced at a later date.

Members of the Band are invited to pre-register for the meeting if attending in person.  Please be advised that attendance is limited due to COVID-19 restrictions that are currently in place. To pre-register, please call (709) 634-5163 or email communications@qalipu.ca.

Members are encouraged to tune in to a live stream of the meeting which is accessible through the ginu membership database.  If you need help accessing your profile or have questions about how to view the live stream, please contact our Indian Registration Administrator at 709-634-4010 or toll free (Newfoundland only) at 1-855-263-6440.

Nomination forms are available for download at www.qalipu.ca or at the Corner Brook band office at 3 Church Street. Completed nomination forms must be returned to the Corner Brook office either by postage mail or hand delivered. A nonrefundable fee of $25.00 shall be submitted with the nomination papers in the form of money order, bank draft, certified cheque, or cash. Nominations are to be received no later than 12:00PM on September 10, 2021 and will be considered as filed with the Electoral Officer for the purpose of the Band Election to be held on October 22, 2021.

Members can view the Electoral Voters List at the Corner Brook Office or on the band webpage at www.qalipu.ca to confirm their eligibility to vote.

As a direct result of the ongoing Covid-19 Pandemic and previous multiple stay-at-home orders, Qalipu First Nation recognizes that its members have endured financial hardship due to an unexpected rise in the cost of heating and running their homes. To support its membership through these unprecedented times, Qalipu First Nation is pleased to host a random draw to disperse a one-time payment up to $200 to successful applicants towards their incurred Home Heat & Energy Costs. The draw will extend until funds are exhausted.

Here are the details you will need to know to enter the draw for the Residential Home Heat & Energy Rebate:

Complete one of the following form options to apply:

On March 29, 2021, after 27 months of discussions, Canada made the unilateral decision to pause further discussions with Qalipu First Nation and abandon joint efforts to address Band membership for former members of the Federation of Newfoundland Indians (FNI) and its affiliates.

In a letter to Band Chief Brendan Mitchell, the Director General of the Individual Affairs Branch notes that, “After much consideration, Canada has decided to pause further discussion of reconsideration options for Founding Membership for individuals who held a membership in the Federation of Newfoundland Indians and their affiliates due to the active litigation on the validity of the 2013 Supplemental Agreement.”

The litigation referred to in the letter dated March 29 was active in November 2018 when exploratory discussions were initiated by Minister Carolyn Bennett and in September 2019 when we received a letter from then MInister of Indigenous Services Seamus O’Regan reaffirming Canada’s commitment to ongoing exploratory discussions. In this context, the explanation provided by the Director General to pause discussions does not make sense.

The discussions, which began in December 2018, focused on addressing outstanding concerns regarding members of the Canadian Armed Forces, Veterans, RCMP and FNI members or members of other Mi’kmaq organizations who were named in the 2008 Agreement and denied Founding Membership.

“These were obvious issues that we could easily agree needed to be remedied” noted Band Chief Brendan Mitchell.  “People who were stationed away from home in service of their country had a hard time demonstrating the community connection for the Group Acceptance criterion.   We also had a glaring issue around members of the FNI.  These were the very people for whom the First Nation was created, the people who voted to ratify the Agreement with Canada that created the Qalipu First Nation.”

Chief Mitchell noted that the First Nation entered discussions in good faith, in the true spirit of Reconciliation, trusting the Government of Canada to follow through with its stated intention from 2018.  The promise was reaffirmed a year later in a letter from Minister Seamus O’Regan, who was then the Minister of Indigenous Services.  This unilateral decision by Canada to pause the discussion is contrary to the concept of our nation-to-nation relationship, that is based on cooperation and partnership which has been asserted by Canada since the outset of this process.

In its letter of response, the Qalipu First Nation strongly urges the Government of Canada to reconsider its decision in view of its inconsistency with past commitments Canada has given to continue discussions.

Band members and FNI and affiliated Mi’kmaq who were denied status, are encouraged to add their voice to the conversation by writing to their local Member of Parliament.

Template letter regarding QFN and Canada discussions re FNI members

On February 17, the Band announced funding of $275,000 to support seniors aged 60+ and essential workers who incurred childcare costs during the pandemic. The benefits, payable at $50 monthly to seniors to subsidize the cost of travel for essential supplies, and up to $200 monthly per child for essential workers with childcare costs, were made possible through a federal fund whose criterion held that the Band member had to be living in Newfoundland to avail of the funding.

Qalipu First Nation is pleased to announce that following discussions with government, the criterion have been modified to make these benefits available to all eligible members, regardless of their location.

Mitch Blanchard is the Manager of Qalipu Health and heads up this benefit program. He noted that accessibility of the benefit for all eligible members was something he was pleased to be able to offer through working with partners.

“We knew there would be challenges with availability and that there were members living outside the region who needed this benefit just as much as those living on the island. We approached Indigenous Services Canada regarding our concerns around accessibility for all members and we are pleased to say our concerns were heard. The program has been changed to allow all eligible Qalipu Band members to apply, regardless of where they live.”

Band members living outside Newfoundland whose applications were previously rejected due to location will now be reassessed and will not have to apply again.

All eligible Band members are invited to apply for the Covid-19 support benefits which can be found here https://qalipu.ca/covid-19-support-programs 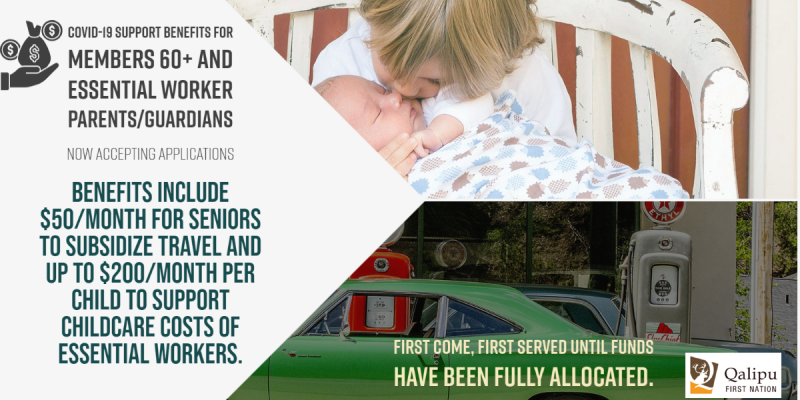 Seniors aged 60 + and essential workers who incurred childcare costs during the pandemic will be the recipients of a new benefit fund valued at $275,000 that will be administered by the Band effective today until all available funds have been fully allocated.

The Vulnerable Population Essential Travel benefit is geared toward seniors aged 60 +.  These Band members are eligible to apply for a monthly subsidy valued at $50 (per household) to support travel for purchase of groceries and other essential items during the pandemic.  Alternatively, seniors who require a taxi to travel may request travel arrangements be pre-paid in lieu of the $50 benefit.

The Essential Worker Childcare benefit is for Band members who were essential workers during the COVID-19 pandemic and incurred childcare costs.  These individuals are eligible to apply for up to $200 in monthly benefits per child.  This benefit can be paid retroactively starting in April 2020, will require a letter from the members’ employer verifying their status as an essential worker, along with childcare receipts.

Band Chief Brendan Mitchell noted, “In light of recent developments around the COVID-19 pandemic in our province, it is clear that our communities continue to need our support in whatever way we are able to give it.  I’m happy to be able to assist seniors and essential workers at this time and the Band will continue to advocate for programs and benefits for Band members impacted by this difficult situation.”

Health Manager Mitch Blanchard heads up the new program and has several staff in place to help make administration of these benefits as smooth as possible.

“We know that there are a lot of members in our Band who will be eligible for these benefits which will likely mean a high volume of applications.  Our staff are ready to help as many people as we can with the available funds.” 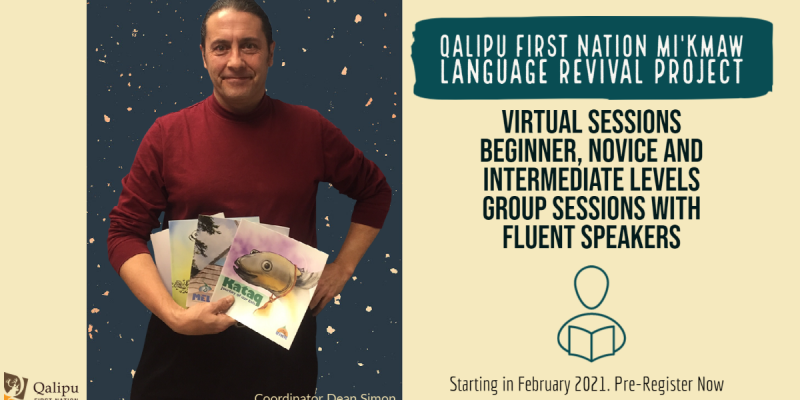 Qalipu First Nation is pleased to announce the launch of a new project focused on the revival of the Mi’kmaw language among our membership.  The project, set to begin in February, will take place via virtual workshops, will be available to beginner, novice and intermediate levels and will aim to create opportunities for learners to speak with fluent speakers of the language.

Band Manager Keith Goulding noted, “This is an exciting project for the Band and a positive step forward in reviving our heritage. This language initiative gives us an opportunity to deepen our connection to culture and provide our members with meaningful learning opportunities.”

The language project will be coordinated by newly hired Project Coordinator Dean Simon who has just returned from a two-year Mi’kmaw immersion program in Eskasoni.

“The Mentor-Apprentice Mi’kmaw Program with Mi’kmaw Kinamatnewey has provided me with a solid understanding and comfort with the language and I’m so excited to share what I’ve learned.  Right now, to get an understanding of where people are with their level of learning, I am asking everyone who is interested to complete the pre-registration”, Simon said.

The pre-registration can be completed here: https://www.surveymonkey.com/r/YNGJLVX

For more information, please contact Dean at dsimon@qalipu.ca or call 643-4593

Band Chief Brendan Mitchell was pleased to share news of this development, which he says is a positive step forward in Qalipu’s journey.

“This is another encouraging step forward on our journey. It is important that First Nations stand together in their negotiations with Canada; when we speak confidently with one voice, we are strong. I look forward to working with Chiefs of the other First Nations in Atlantic Canada to accomplish positive outcomes for our respective communities.”

Mitch Blanchard, Manager of the Health and Social division for Qalipu First Nation explained how the new partnership will benefit Band members.

Qalipu First Nation’s inclusion in the Health Partnership is a key step in accomplishing community health priorities. Qalipu First Nation will have the opportunity to share, learn and collaborate with other First Nations Chiefs, FNIHB/ISC, APC Health Directors, and other like-minded organizations.

Blanchard added, “We look forward to what we can accomplish together, and continued opportunities to work together with other First Nations in Atlantic Canada.”

Qalipu First Nation is pleased to announce the launch of the COVID-19 Business Support Fund for member-owned businesses. $150,000 in funding is available and the Band will distribute the funding as non-repayable grants of up to $10,000 for small businesses that qualify. The fund, made available through Indigenous Services Canada, aims to support small businesses that have been negatively impacted by the pandemic.

Economic Development Officer Kellie Kerpan will receive and process applications starting on Monday, October 26. She noted that the application is straight forward and that the Band hopes to help as many as possible with the funds available.

“To be eligible, the business has to have been in operation for a year, still financially viable and expecting to continue operations, and be able to use the fund to prevent layoffs or other negative impacts due to the pandemic. We also stipulate that the business has not already received any other non-repayable COVID-19 business funding.”

Kerpan added, “We look forward to approving as many grants as possible with this fund and supporting Band members who are working so hard to keep their businesses going during this challenging time.”

The application and guidelines are now available online. Applications will be processed on a first-come, first-served basis. Applications received before the starting date of October 26 will be returned.